HRH The Princess Royal has opened the new Kennedy Institute of Rheumatology building.

Her Royal Highness was given a tour of the new research facility, heard about the institute's past successes and current research, and unveiled a plaque. Professor Sir Marc Feldmann, the current director of the Institute and Professor Fiona Powrie, who will take up the reins on 1 October, led the tour of the research facility.

Her Royal Highness heard about what is known about the causes of arthritis, inflammatory bowel disease, psoriasis and other inflammatory diseases from Kennedy researchers, and had the opportunity to see cells imaged in unprecedented detail using new types of microscope as part of research that can give insight into immune responses in arthritis. The Princess Royal also discussed the latest research on what can trigger osteoarthritis and approaches that might prevent or cure the condition.

On unveiling the plaque, Her Royal Highness commented on the amazing privilege of having opened the Kennedy Institute's building in London in 1985 and now seeing it reach new heights almost 30 years later. She praised the focus and dedication of all researchers at the Kennedy, working on behalf of those who suffer from arthritis and other inflammatory diseases, thanked them for their hard work, and wished them well in their endeavours. 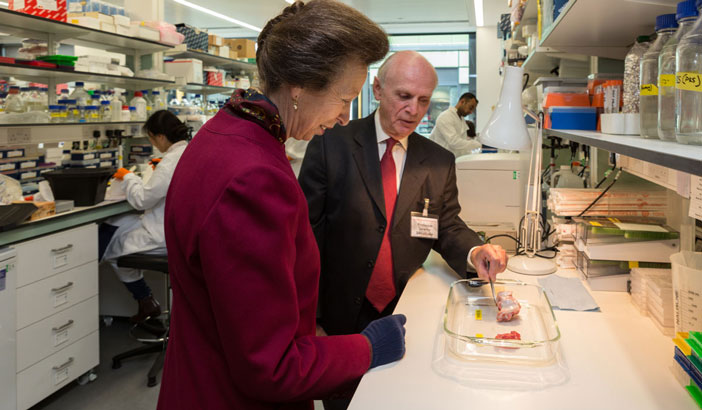 The Kennedy Institute joined the University of Oxford in 2011, and construction of its new building on the Old Road Campus site was completed in 2013. The 36M world-class building, with its purpose-built labs and state-of-the-art equipment offers the perfect home for scientists developing new treatments and studying the possible causes, mechanisms and biological pathways underlying arthritis and other inflammatory diseases.

Professor Sir Marc Feldmann, director of the Kennedy Institute, says: 'We were delighted to welcome The Princess Royal to Oxford to open the new Kennedy Institute building. It was with great pleasure that I introduced her to the many scientists here who are working to develop new and improved treatments for arthritis, a disease which causes such a burden of pain and discomfort for so many millions of people in this country.'

Professor Fiona Powrie, who from October will be the new director of the Institute, adds: 'The Kennedy Institute has an incredible track record in both understanding the causes of inflammation and developing novel treatments that can help many patients. The discovery of anti-TNF drugs was a remarkable advance that has changed the way rheumatoid arthritis is treated. It's terrific to be able to celebrate these successes with the visit of The Princess Royal; we were thrilled to see her interest in the work we do, ask questions on current research, and find out about we're going in the future. And with a new building at Oxford University that really provides the equipment and environment to conduct the best science, we can look forward to many more discoveries in the future.'

Now part of Oxford University's Nuffield Department of Orthopaedics, Rheumatology and Musculoskeletal Sciences, the Kennedy Institute can join its world-leading expertise in inflammation to other University research in immunology and orthopaedic surgery. Its work also benefits from being in close proximity to the Nuffield Orthopaedic Centre, part of the Oxford University Hospitals NHS Trust. 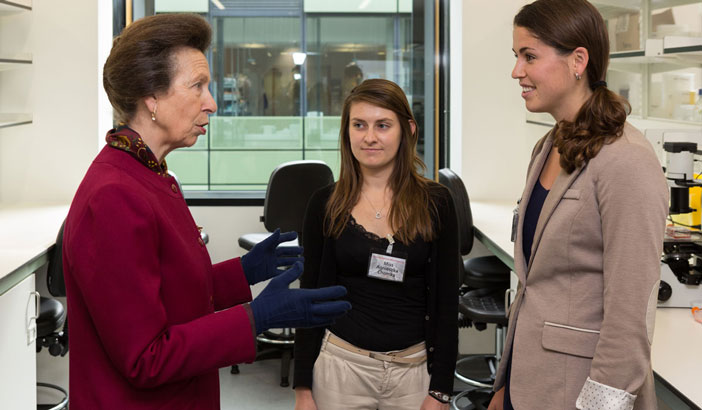 The Kennedy Institute's research will continue to be strongly supported by The Kennedy Trust for Rheumatology Research.

James Davis, Chairman of The Kennedy Trust for Rheumatology Research, said: 'The Trust's financial commitment to the Institute reflects its mission to support research into rheumatoid and other chronic inflammatory diseases. In this wonderful new building, the Institute will go from strength to strength as a world class centre for medical research.'

The Kennedy Institute is recognised worldwide for the discovery, by Sir Marc Feldmann and Sir Ravinder Maini, of an antibody-based treatment, or 'anti-TNF' therapy, for the treatment of rheumatoid arthritis and other inflammatory diseases. Since the first anti-TNF treatments were licensed at the end of the 1990s, millions of people with rheumatoid arthritis around the world have benefited from the therapies, transforming the lives of many patients.

Anti-TNF therapy works rapidly in most patients with rheumatoid arthritis to reduce pain, improve mobility, reduce joint swelling and boost quality of life. And in comparison to conventional drugs, it reduces the risk of heart attacks, strokes and increases life expectancy. It has a major role in protecting joints from degeneration, reducing the need for joint surgery. Anti-TNF drugs are now the biggest selling class of drug worldwide.

To respond to advances in technology and try to answer an increasing range of biological questions, the Kennedy Institute has invested in a high-performance computing facility. We speak to Brian Marsden, Associate Professor of Research Informatics at the Kennedy to find out more.

Since 2013 the Kennedy Institute of Rheumatology has been running a Career Development Programme, a scheme to help early career researchers launch their own independent laboratories, and more recently the Innovator Investigator Programme to bring new technologies to core research themes.

A new £1.5M grant from the Medical Research Council (MRC) to the Powrie Group at the Kennedy Institute will help define different pathotypes of inflammatory bowel diseases that could lead to better and more focused treatments for patients.

Professor Fiona Powrie was honoured in the 2022 Queen’s Birthday Honours List, published as Her Majesty celebrates her Platinum Jubilee.